The mobile app industry is very competitive. There are more than 7 million apps available in the leading application stores, and thousands of new apps launched daily. While the market is dominated by few major apps, small and medium mobile apps (SMMA) that represent 99% of the market, face adoption and monetization issues.

Current mobile apps work in standalone mode and users of one app cannot interact with contacts on different apps. This standalone nature of mobile apps in the industry favors major players who leverage their “network effect” to grow and retain their user base, while SMMAs strive to acquire new users or keep their existing users who want to be on major apps where there contacts are. Thus, newly launched apps must quickly reach a critical mass to succeed. With an average user acquisition cost of $2.00, SMMA developers cannot afford such costs to rapidly grow their apps’ user base. As an alternative, they must turn to major social platforms to allow their apps to be discovered.

Unfortunately, most SMMAs don’t survive due to these major players copying their new ideas and key features before they reach mainstream. Moreover, since monetization of mobile apps is mostly based on advertising, SMMAs cannot easily monetize due to low ad impressions. Developers must also comply with the new GDPR regulations, putting an additional pressure on SMMA owners who monetize through advertising models that are known to violate user privacy.

Hibe, a fully functional platform that provides a “Facebook for apps” to address these unmet needs faced by SMMA developers. This game-changing technology allows many thousands of unrelated mobile applications to “friend” each other in order to allow their apps’ users to interact with each other. Developers plug the backend of their mobile apps to Hibe through an easy-to-integrate Application Programming Interface (API), with zero download and zero learning curve for their existing app users.

Hibe provides SMMAs to be part of a much bigger network of cumulative users and a beachhead against a market dominated by few major applications because of their “network effect”. Adoption of SMMAs is done through organic growth by making each app easily discoverable by the contacts of their existing users in their interactions via Hibe’s core app-to-app communications feature. Users of SMMAs can reach and interact with their contacts on different apps plugged on Hibe; therefore they no longer need to leave their favorite apps to join their contacts on major platforms. Hibe also represents a huge monetization opportunities for SMMA developers, through its revenue sharing program.

As part of a market validation for the Hibe platform, two surveys have been conducted with more than 5K SMMA developers, using SurveyMonkey. The developers were randomly selected in the Google’s Play Store. These developers have apps with 1K to 500K downloads, published in all categories and released between Dec-2016 and Jan-2019. They were contacted using their support emails provided in the Google’s Play Store.

The goal of the first survey was to validate the interest of SMMA developers in the Hibe platform. This survey named “The Social Network for Mobile Apps is Here”, which refers to the Hibe platform, was conducted between Jan 12-28, 2019. Within this survey, the respondents were introduced to Hibe. The survey consisted in 6 multiple choice questions where respondents were allowed to choose only one answer. Those who did not give an answer were not included. The email campaign got a 33% open rate while the click-to-response rate of the survey was 38%.

The goal of the second survey conducted between Feb 11-20, 2019 was to rate the complexity of the Hibe API. This survey was named “A Majority of Developers to Join Hibe”. The survey consisted in 5 multiple choice questions where respondents were allowed to choose only one answer. Those who skipped all questions were not included. The email campaign got a 35.9% open rate while the click-to-response rate of the survey was 23.3%. Developers were asked about the level of difficulty of the API they expected for a social network for application. After being introduced to the Hibe API, they were asked to rate the level of difficulty of this API, and more specifically about the difficulty level for the three main tasks of the Hibe API, i.e. registering an app user, pushing an app user content to their contacts on other apps, and pulling content targeting an app user.

What comes out from the first survey is that more than three quarters (76.2%) of the developers were very or extremely interested in joining Hibe fto address adoption, retention and monetization problems of their mobile applications. In addition, the vast majority of developers (82.6%) would be willing to spend few hours to integrate to integrate their apps to the Hibe platform. 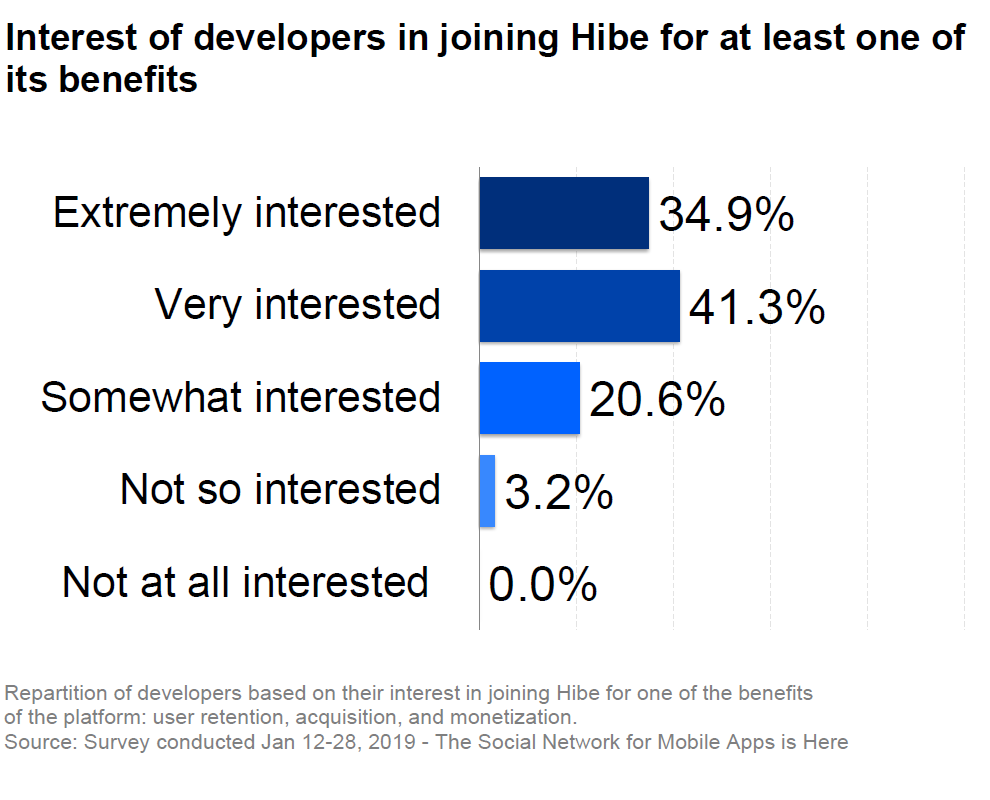 The second survey revealed that 70.5% of respondents found that the Hibe API was easier or not more difficult that other API tools they have used in the past. The detailed results of both surveys are shown below.

A majority of SMMA developers (93.7%) say they would join Hibe to address adoption of their applications. 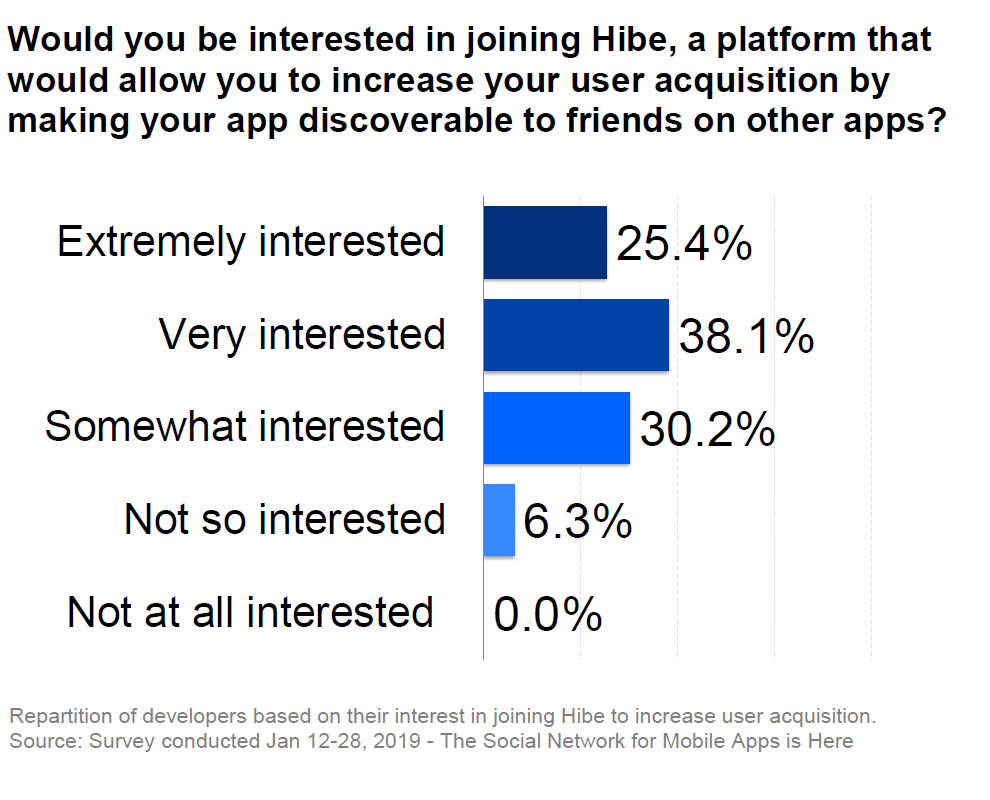 A majority of SMMA developers (90.5%) say they would join Hibe to address user retention on their apps. 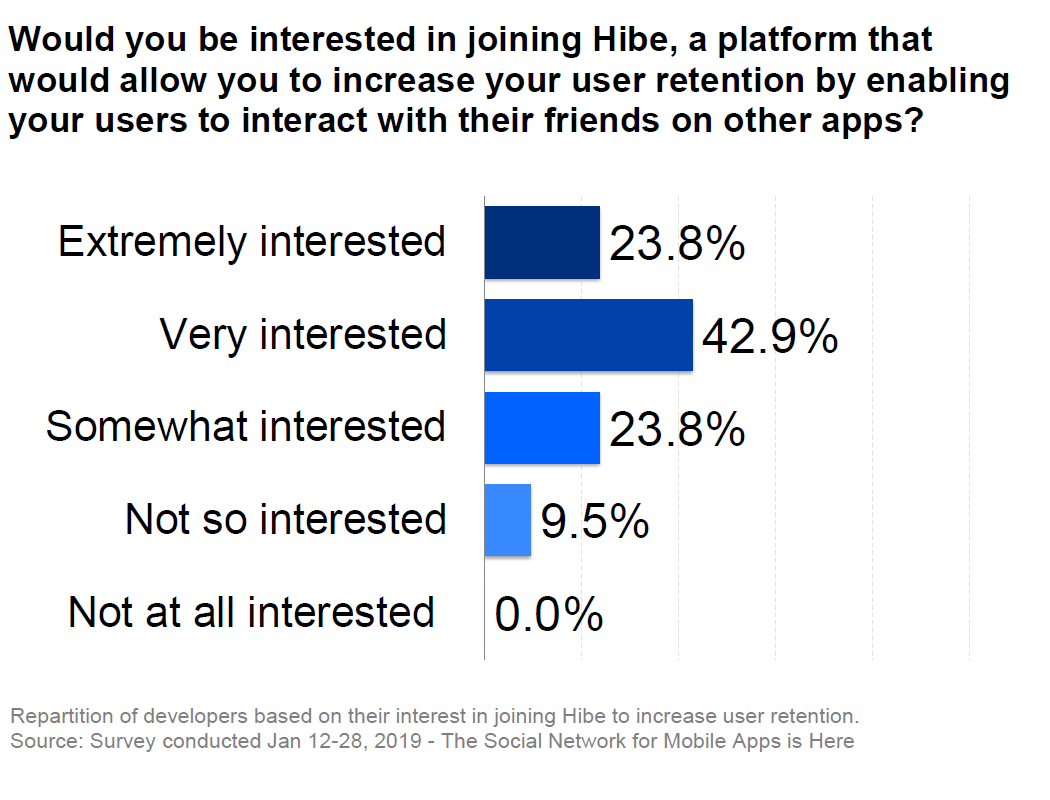 A majority of SMMA developers (93.6%) say Hibe will help them address monetization of their apps. 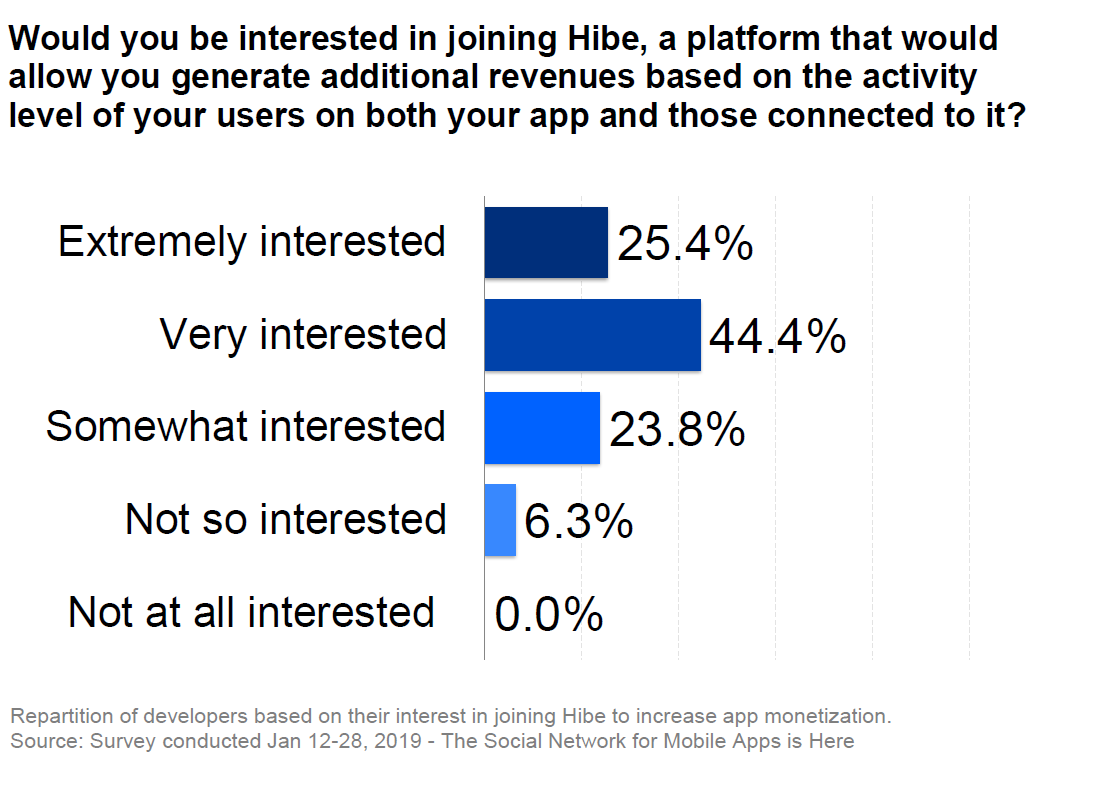 A majority of SMMA developers (82.6%) are likely or very likely to spend few hours to integrate the back-end of their mobile app to Hibe to address their problem of user acquisition, retention and monetization. 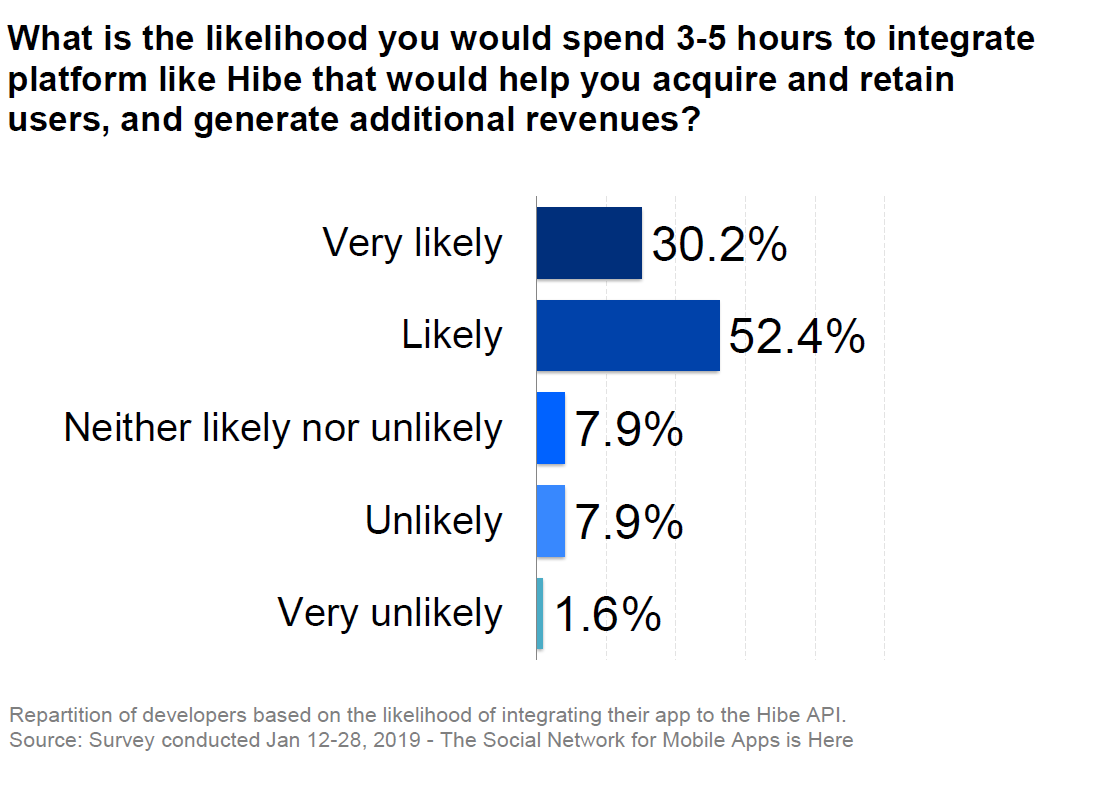 A majority of developers (52.9%) expected the API of a social network for mobile apps to be difficult. 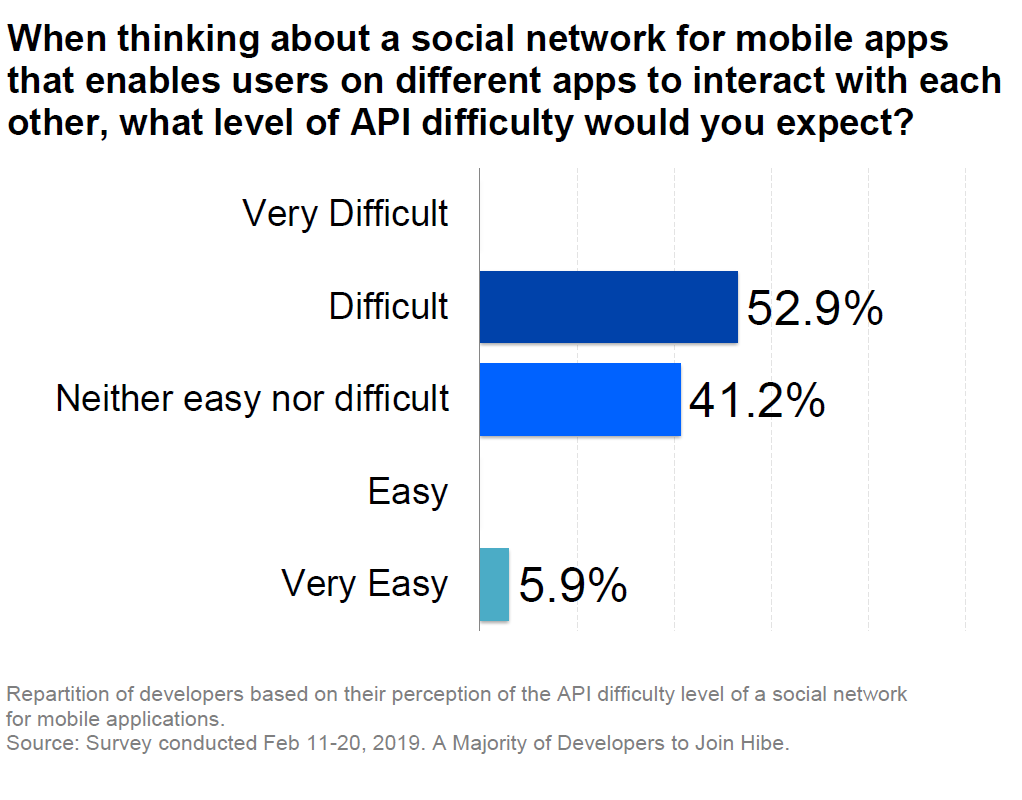 More than 47% of developers rated the process of registering their apps' users on Hibe using its API as being easy or very easy, while 29.4% found it difficult or very difficult. 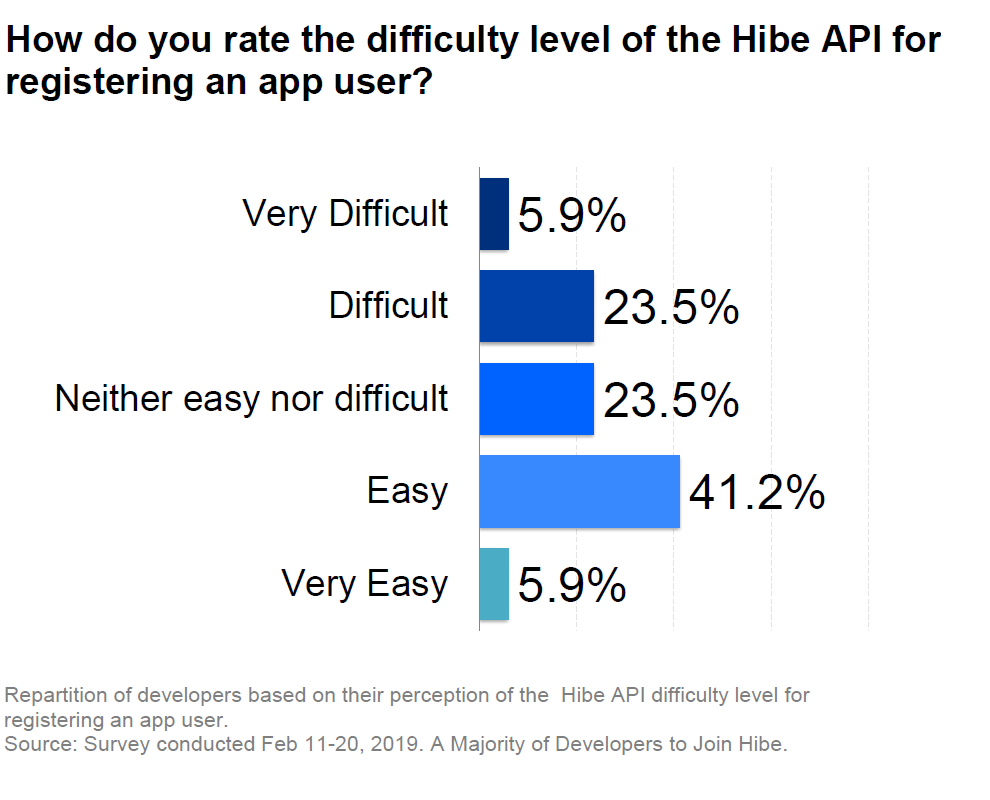 A majority of developers (52.9%) rated the Hibe API process of pushing content of their apps' users to contacts on other apps through Hibe as being easy, while less than a quarter of respondents (23.5%) found it difficult or very difficult. 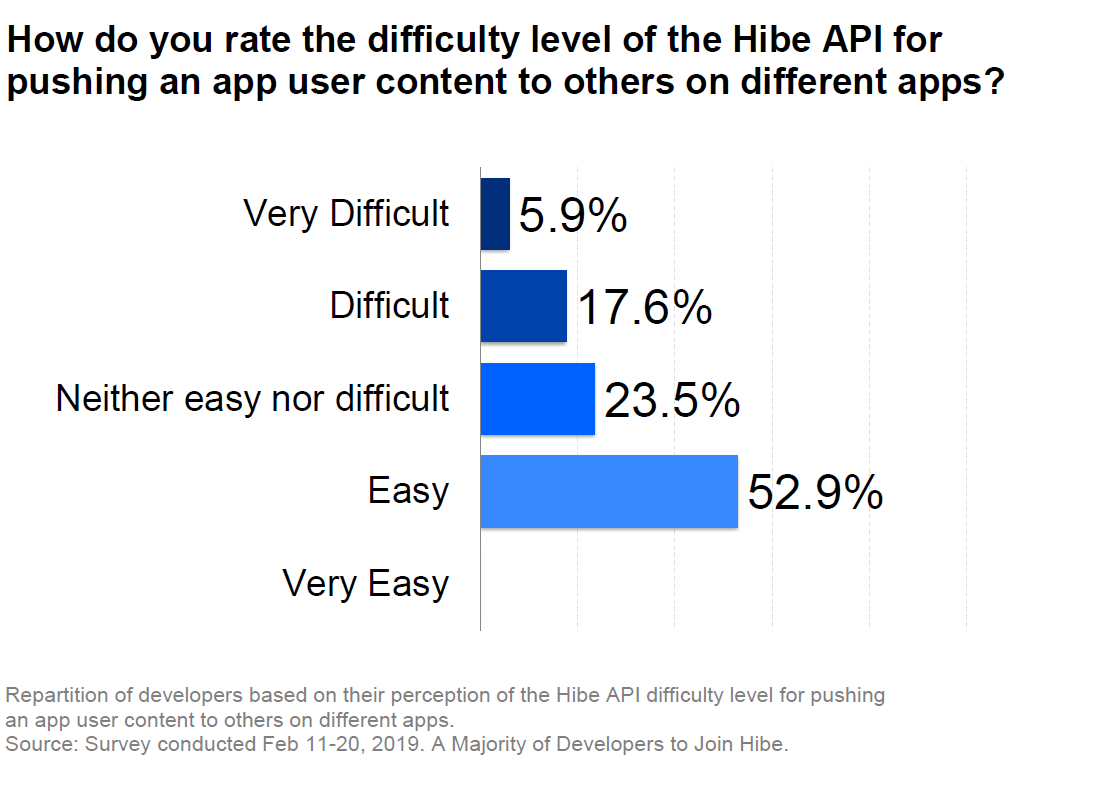 Developers were equally divided about the level of difficulty of the Hibe API process of pulling content targeting their apps' users from contacts on other apps through Hibe, with 37.6% of them saying it is easy or very easy, 37.6% saying it is difficult or very difficult, and 25% saying it is neither easy nor difficult. 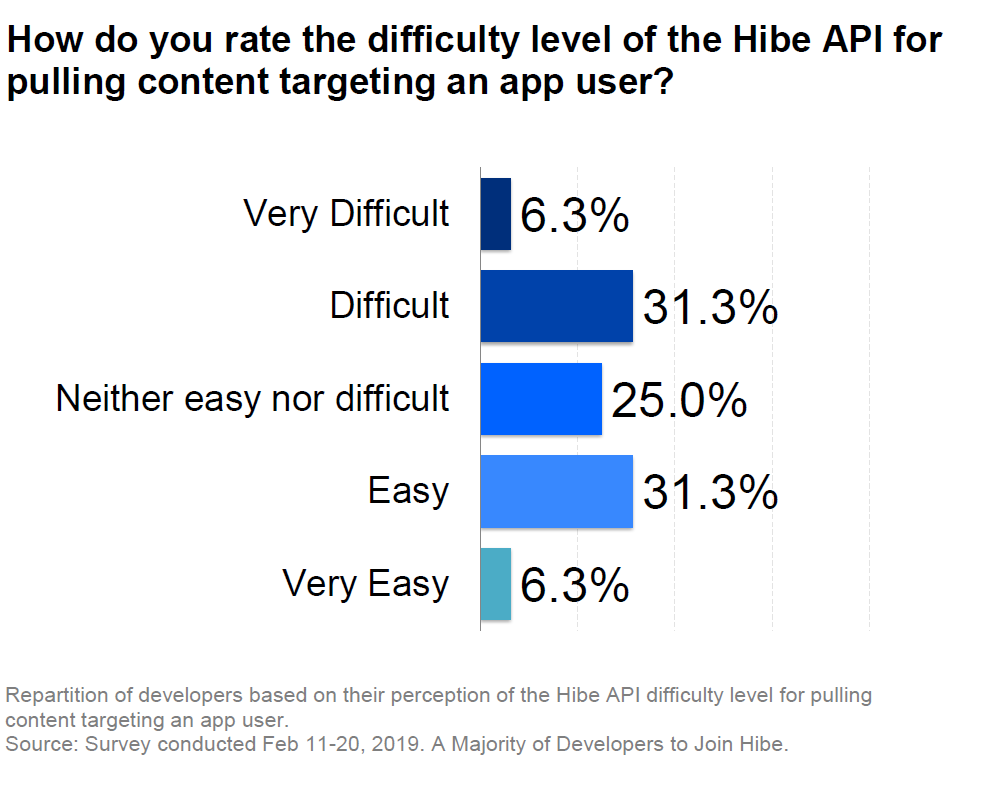 A majority of developers (52.9%) rated the Hibe API as neither easier nor more difficult than other API tools they already used in the past. 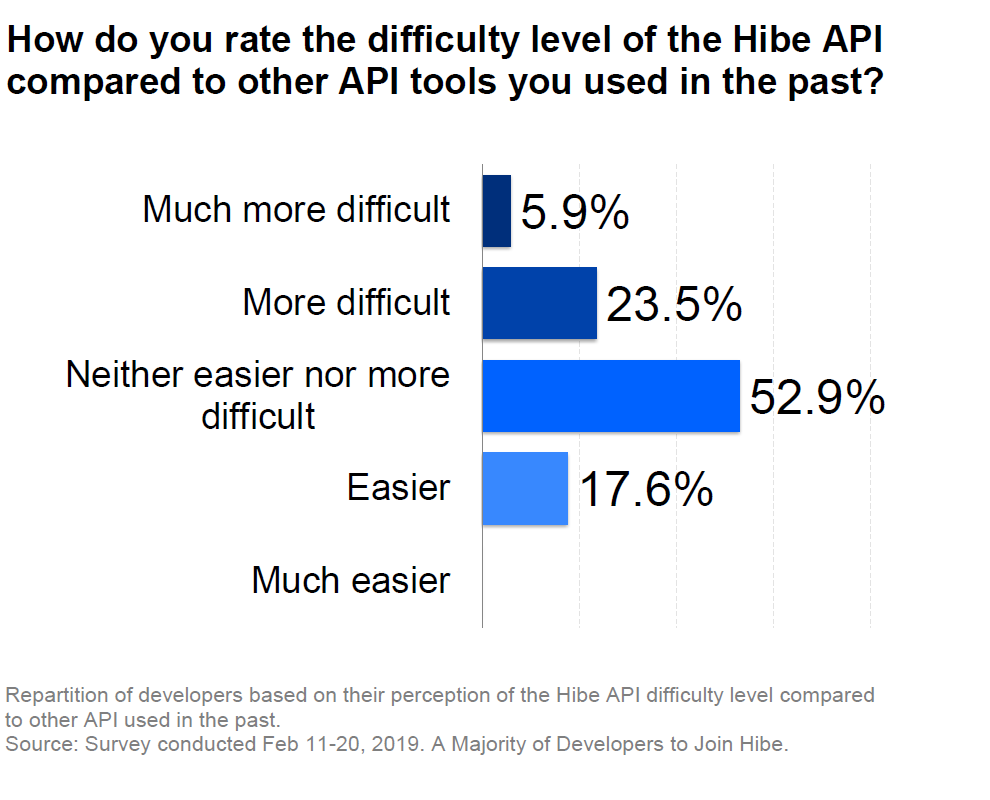 A majority of the apps published by respondents do not allow users to share content between them (73.0%) or with users on other apps (68.3%) 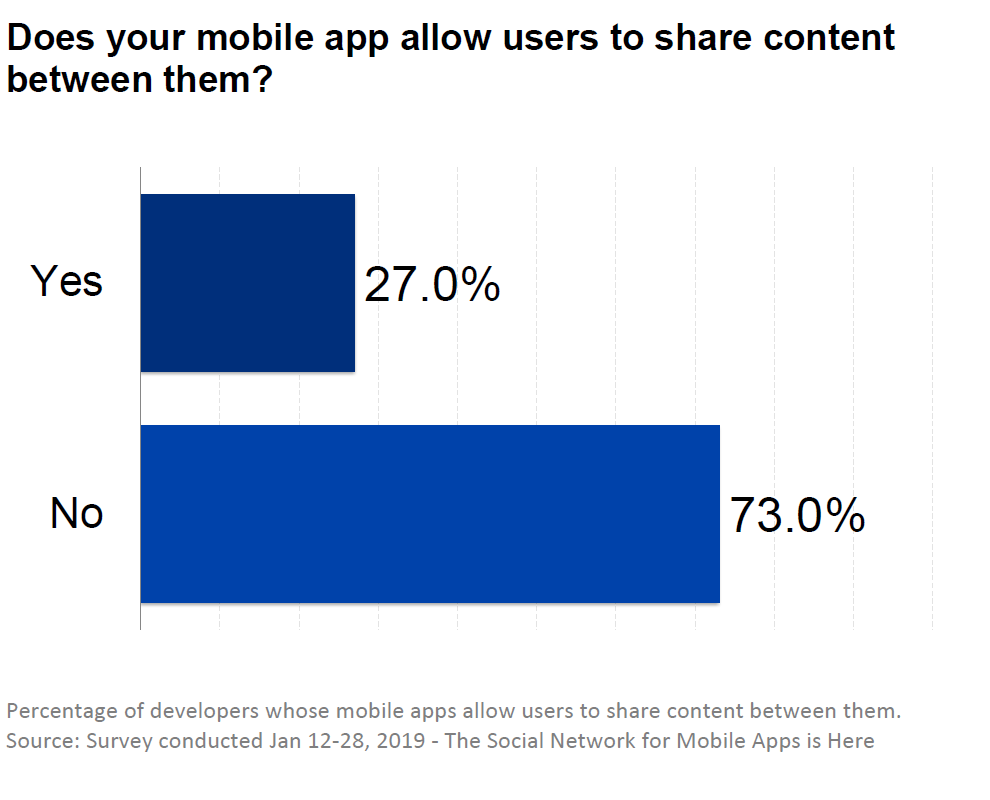 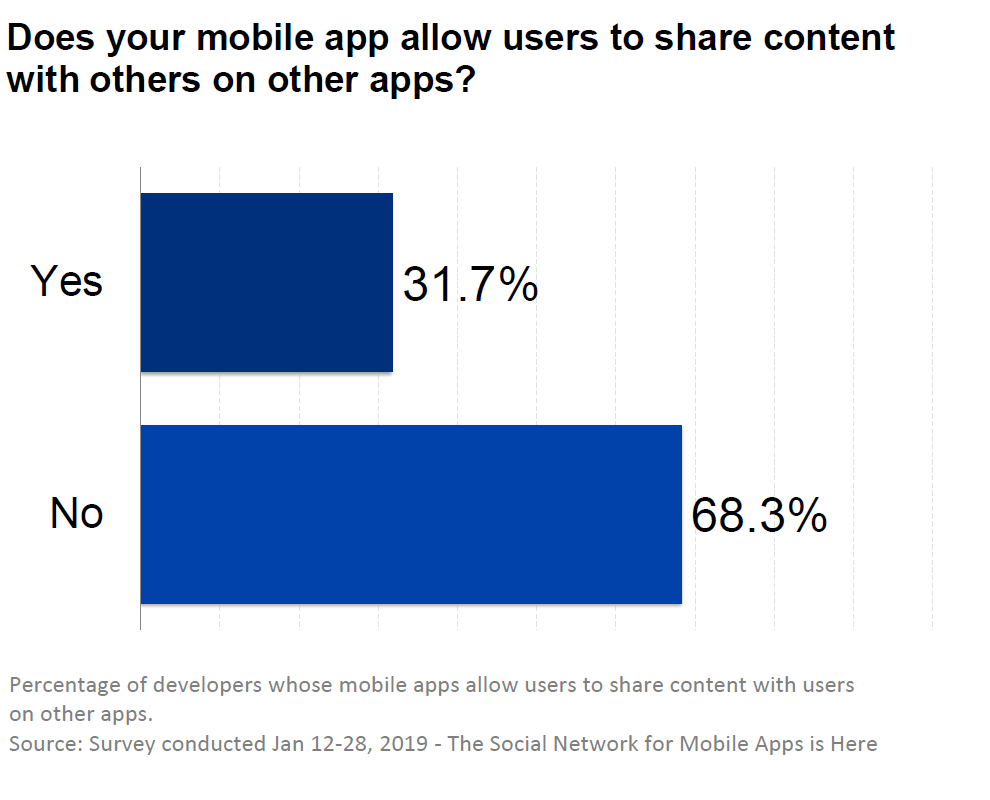